Opening Reception Saturday, May 10, from 1-4pm

Long-known as a prominent resource for prints and works on paper, our partner, The Old Print Shop in NYC, is expanding its repertoire with an exhibit of two artists, each notably accomplished in the discipline of sculpture. The street-level gallery, recently created to show contemporary art, has been further configured to accommodate this show. 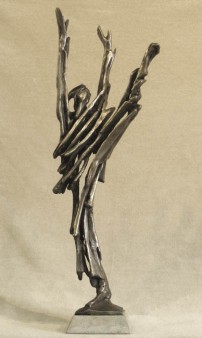 Joy. By Robert Cook. Bronze, unique, made with the lost wax process, 2012. LINK.

Robert Cook was born in Boston in 1921. He studied with George Demetrios, a classical sculptor. During WWII he served in Europe as an engineer making maps and models. After the war he stayed in Paris to study with Marcel Gaumont at L’Academie des Beaux Arts. In 1948 he moved to Rome. He is an innovator in the “lost wax” process of casting, creating larger sculptures than had previously been possible. He has a number of major public sculptures in New York, Boston, Philadelphia, Saudi Arabia, Italy and Canberra, Australia. His work, “Dinoceras,” is in New York at Park Avenue and 51st Street. His works are in the Victoria and Albert Museum, The British Museum, the Hirshorn Collection, the Whitney Museum and the Mobile Museum of Art. He draws inspiration for his sculptures from dance, theater, sports and animals. Jazz music infuses his studio as he works. 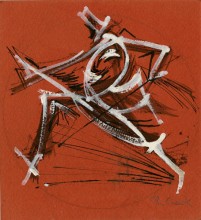 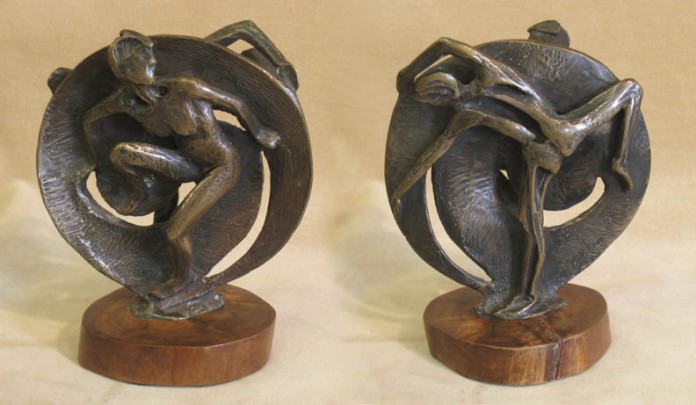 Medal Center. By Robert Cook. Bronze, unique, made with the lost wax process, 1995.

Masaaki Noda was born in Hiroshima, Japan, in 1949. He studied at Osaka University of Arts, and in 1977 he came to the United States and studied at The Art Students League. He pursues sculpture in a unique way, making paper and clay models until he has the exact design he is seeking. He has had numerous public installations in Japan, Greece, and China, including an exhibition of his work at the Shenzhen Museum of Art in China. His work is in numerous public collections including the Brooklyn Museum, Fukuyama Museum of Art in Japan, Hiroshima Perfectural Art Museum, Portland Art Museum, Philadelphia Museum of Art and Shenzhen Museum of Art. Masaaki draws inspiration from the artistic conflict between form and abstraction. 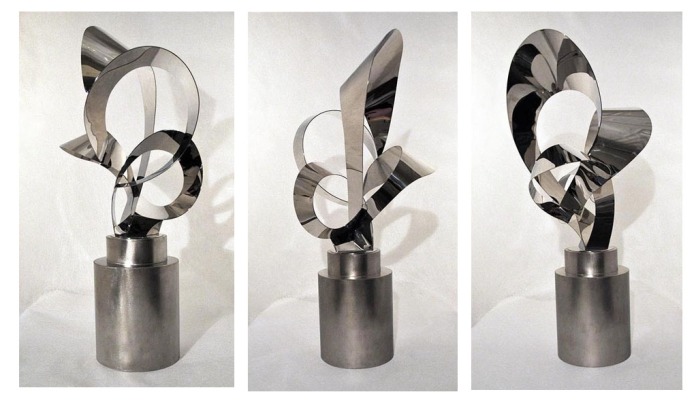 For more information on this show, go to The Old Print Shop website: www.oldprintshop.com.

If you are in the New York area, we invite you to come and see the show. Both artists will be at the opening reception on Saturday, May 10th from 1 till 4 pm. Masaaki Noda will be there in person and Robert Cook will attend from Italy, via Skype.

Murphy was born in Staten Island in 1952.  He studied at The School of Visual Arts, The Art Students League, Pratt Graphic Center, and received an MFA from Vermont College.  He holds the rank of Professor of Visual Arts at Wagner College, Staten Island where he has taught since 1983. Murphy is a member of Audubon Artists, Print Club of Albany, and the Society of American Graphic Artists (SAGA).

A particularly poignant line from Murphy’s artist statement is a great illumination of what makes his prints so successful: “The aspect of picture-making which intrigues me the most is at the point where luck and intention meet – the crisscrossing of fate and accident on the way to finding a picture.” His nude lithograph is a perfect visual testament to his instinctive and liberated method; it is a very subtle print- not overworked or exhaustive in its line work. Similarly, Mastro-Valerio’s nude benefits from a softer and delicate touch. The sheets are a tumble of indistinguishable folds, and his use of line is sparse- with only subtle definitions to the curve of the hip, shoulders, and hands, leaving the face and background bathed in shadows.

We hope you enjoy these two beautiful prints!