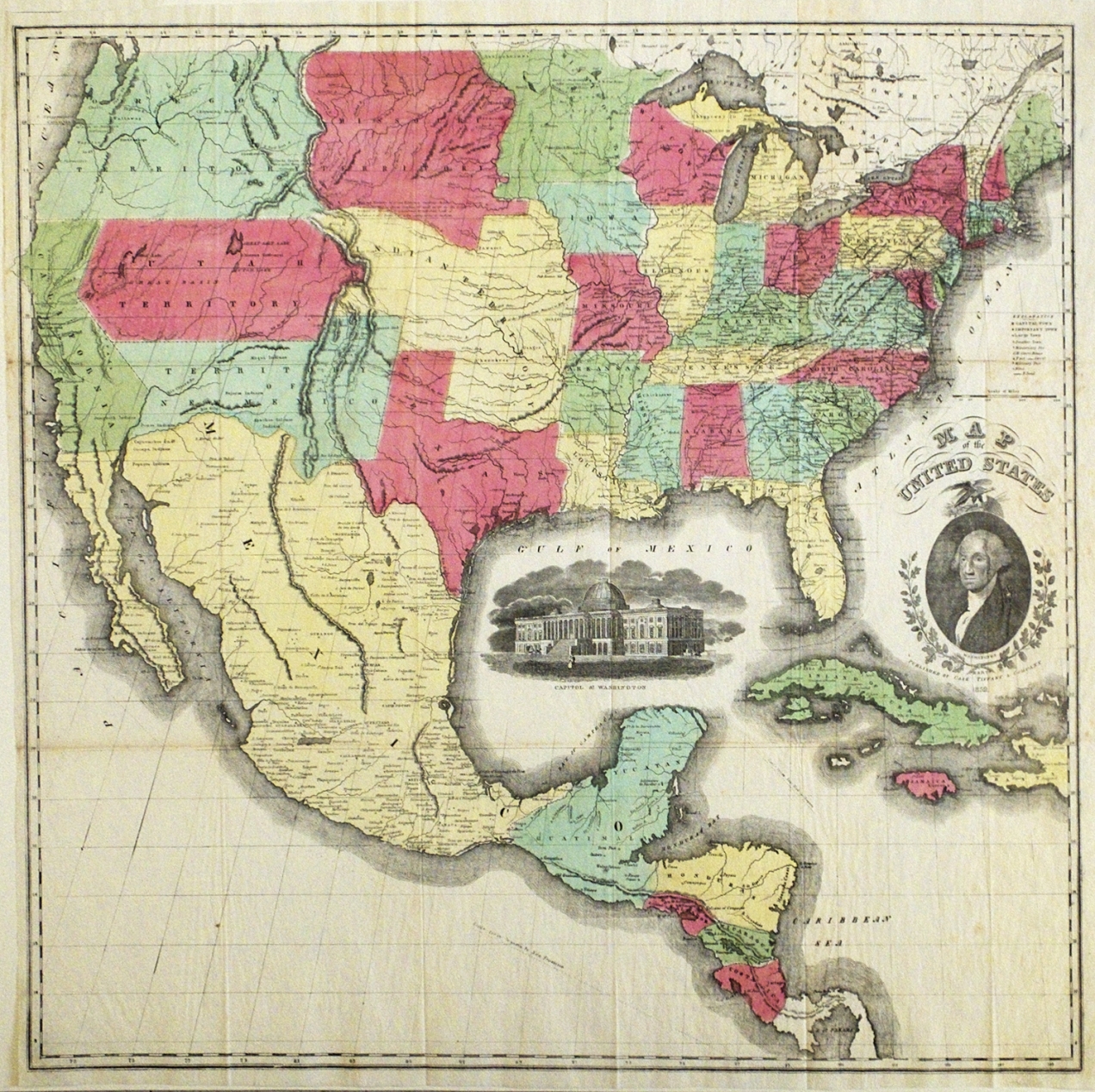 New to the OPG inventory is this colorful map of the United States, Mexico, and Central America.  Published by Case, Tiffany & Co. in 1852, the map is an incredible snapshot of the United States right after the Compromise of 1850. It was a very tumultuous time for our nation; and the delineation and distribution (as well as political leanings) of new territory acquired at the the end of the Mexican-American War were bitterly contested. 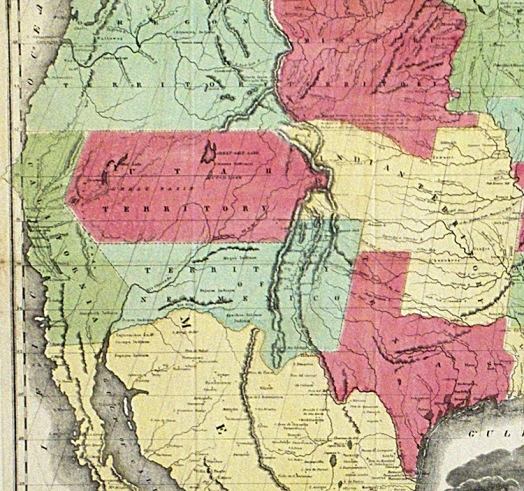 This map shows the newly created state of California, added to the Union as a free state. It also depicts the boundaries for the Territory of New Mexico and Utah Territory.  The shape of Texas is distorted on the map, as a result of the Rio Grande engraved too vertically.

A portrait of George Washington, along with an early rendition of the Capitol building in Washington, adorn the right side of the map. The map also indicates important towns and cities, forts, missionary settlements, and railroad lines. Steamboat routes from New York to Chagres and to California by way of Panama are also shown.

We received several antique maps at the Old Print Gallery yesterday, all of which make great additions to our inventory. Included in this group of new (to us) maps was a rare, separately published, English-produced map of the Americas by John Overton.

John Overton (1640-1713) worked first as an apprentice to Thomas Gould in the “Stationers’ Company” for eight years, before buying a print shop from Peter Stent in London. His shop, as noted on all his published material, was located at the sign for “White Horse neere the Fountaine Tavern Without Newgate“. Overton inherited and quickly accumulated a considerable print stock, but found his inventory of maps lacking. He worked to fill this void by re-publishing maps of influential cartographers of the previous generation, notably acquiring the set of Speed plates from Christopher Browne in 1713.

A New and Most Exact Map of America. Described by N. I. Visscher and Don [sic] into English Enlarged and Corrected According to I. Bleau [sic] and Others. By John Overton. Printed Colloured and Sould by John Overton at ye White Horse neere the Fountaine Tavern Without Newgate. Copper plate engraving, 1668 (c.1671). Image size 16 5/8 x 21 1/8″ (421 x 535 mm) plus margins. LINK.

Overton primarily derived this map of America  from his chief English rivals, Robert Walton, Thomas Jenner and as noted in the title, Nicolaes Visscher. He used Walton’s (Burden #330) map for the decorative borders and large inset map of the polar regions, Jenner’s (Burden #393) for the cartography, and van den Keere’s for the border illustrations, which depict natives, explorers, and city views. This is the second state of the map, issued c.1671. It is in good condition, save for tight lower margin. The hand coloring is modern.

The map, a copper plate engraving, has many interesting details. It depicts California as an island, with the following explanation: “This California was in times past thought to beene a part of thy Continent and so made in all maps but by further discoveries was found to be an Iland, long 1700 legues” . Hudson’s Bay is noted as being very shallow: “In this Hudsons Bay hath been observed by divers that at highwater did not arise about 2 foot.” Although New Jersey is listed, New York is curiously omitted from East Coast place names, despite being under British rule.  The map is also beautifully decorated with ships and sea monsters in the water and grazing, leaping animals in the Midwest. An inset map of the polar circle- including the Strait of Anian– sits in the lower left corner of the map.

This is a fantastic new map to be added to our OPG collection. We invite our blog readers to stop by our Georgetown gallery to see it in person.

New to the Old Print Gallery website are several maps of the United States. The maps range from 1711 to 1851, and mark the exploration and development of settlements beyond the East Coast. Development across the continent was slow after the initial East Coast settlements were established ( Saint Augustine in 1656, Jamestown in 1607, New Plymouth in 1620 and later Detroit in 1700 and New Orleans in 1718). Knowledge of the vast Northern interior was limited to a few miles either side of river courses and to the southwest regions thanks to the establishment of Spanish and later French missions. Accordingly,  much of the cartographical information of the United States before the Louisiana Purchase of 1803 and Lewis and Clark explorations of 1804-06 was scarce and dominated by misconceptions.  With the beginning of the Nineteenth century,  North American maps tell a story of the great settlement of the west, the exploration of territories, and their subsequent achievements to statehood. 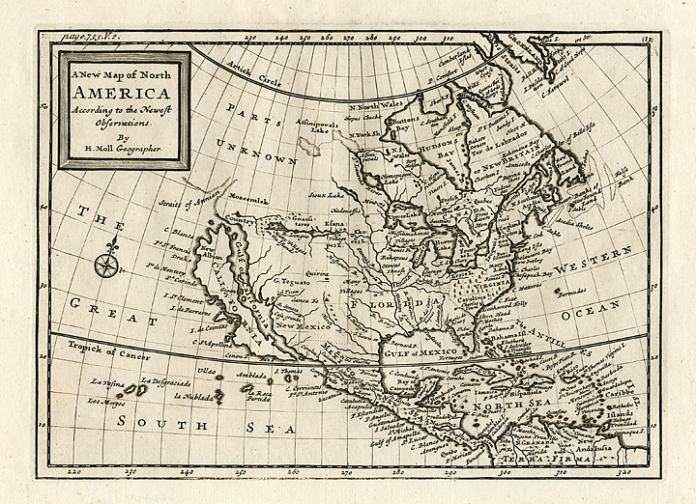 1) A New Map of North America According to the Newest Observations. This copper plate engraving is by Herman Moll.  It was published in London 1711 and is from his “Atlas Geographus” . In this map, California appears as an island on the Sanson model. The myth of an insular California has been discussed before on the blog (read about it here and here). Above California, the Straits of Anian are sketchily outlined. The Great Lakes all appear and the Mississippi River is correctly located. In the interior, another early American map misconception is present-  Lahontan’s mythical River Longue.  (Detail of River Longue  below).

French manuscript maps of the 1670s propose a vast flowing river joining the Mississippi to the Pacific. In 1703, Baron Lahontan wrote and produced a map of the “River Longue”  that stretched from the Mississippi to a great range of mountains in the west. He depicted a short pass through the mountains from which another river flowed (presumably) into the Pacific. He included accounts of Indian tribes who lived on islands in a great lake near the source of the river, and tales of crocodiles filling the waterways. The story of the large river flowing from the west fired the imaginations of many of his readers, since early exploration of North America was inextricably linked with the quest for a route to the Orient. The River Longue was thus a variant of the North West passage myth, and helped keep it alive. Lahontan’s concept was copied by virtually all cartographers through the 18th century.

2) A Map of the United States of America, with Part of the Adjoining Provinces. This copper engraving, with original hand color, was published June 2, 1791, by R. Wilkinson, London. It was engraved by T. Conder. This map is an early map of the United States, with little development in the West. The Tennessee area has special interest: Clarksville and Knoxville both appear, but not the name Tennessee. Instead the area is divided between “Cumberland” and “Holston,” while still joined to North Carolina.

3) Map of the Northern Part of the United States of America. By Abraham Bradley Jr. This copper engraving was published by Thomas & Andrews, Boston, 1797. It is the first state of two from the “Morse’s American Gazetteer.” Notable for being one of the earliest maps printed in America to extend to the Mississippi River, Bradley’s map is equally important for outlining States I (Ohio), II (Indiana), III (Illinois), IV (Michigan) and V (Wisconsin) — the new states formed from the Old Northwest Territory, as proposed by the Ordinance of 1789.  On this map, the Western Reserve is called New Connecticut. 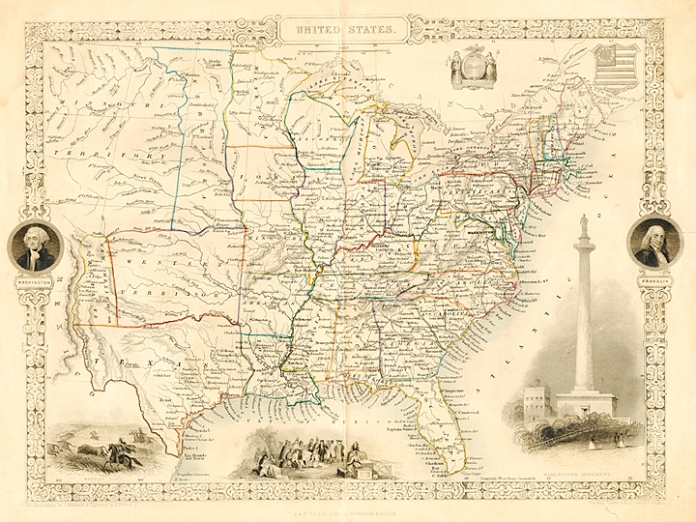 4) United States. By John Tallis. This steel engraving was published by the London Printing and Publishing Company, c.1851. This map is from “The Illustrated Atlas and Modern History of the World” and is a highly sought-after decorative map of the United States. It includes two portraits, George Washington and Benjamin Franklin, as well as inset views of a Buffalo Hunt, Penn’s treaty with the Indians, and Washington’s Monument. It also shows a strangely configured Texas and New Mexico, a pre-Indian Territory region called Western Territory, a massive Missouri Territory, and a strangely elongated Nebraska Territory extending northward to Canada.

5) Map of the United States : Engraved to Illustrate Mitchell’s New Intermediate Geography. By J. H. Young. Published by S. Augustus Mitchell, Philadelphia. Engraved by E. Yeager. This is an informative United States map, especially in the West.  Despite vast developments, many areas retain their territorial status, including Montana, Wyoming, Dakota, Arizona and New Mexico, all of which did not gain statehood until 1889 or later.

To view these, and the other United States maps, available at Old Print Gallery, visit our website ( here) or stop by our Washington, DC gallery, located in the heart of historic Georgetown.

We have a great find to share with you today- a copper engraving illustrating the cartograhic depiction of California over time. Carte de la Californie, by Didier Robert de Vaugondy, was published in Diderot and d’Alembert Encyclopaedie supplement, in Paris, 1770-79. This famous composite map illustrates conceptions of California over two centuries. From right to left, it shows the California coast as depicted by an Italian map of 1604, Sanson in 1656, Delisle in 1700, Father Kino in 1705, and the Jesuits in 1767. Only Sanson’s map portrays California as island, although most maps over nearly a hundred-year period did the same. It was the Jesuit priest Kino who proved the island concept false by walking from the mainland to the California coast. But this map was not generally accepted, and in 1747, King Ferdinand VII of Spain was compelled to issue a formal decree that California is not an island.

For more information, or if you would like to buy this map from our gallery, please visit our website here.