As we prepare for the opening of our new gallery exhibit, Monotypes, we thought it useful to delve into the difference between a monotype and a monoprint for our blog readers and collectors. As their names imply, monotypes and monoprints are prints that have an edition of one. Often referred to interchangeably, these planographic techniques are actually quite different.

A monotype is made by drawing or painting a design in printing ink onto any smooth surface, then covering this matrix with paper and passing it through a press. The result, an exact reverse of the original drawing, is an original and unique monotype.

A monoprint is made by taking an already inked etched plate or carved woodblock and adding additional ink to the surface of the matrix. The matrix and paper are run through the press, creating a monoprint. This additional ink produces an impression different in appearance to a conventionally-printed impression from the same plate. Since it is virtually impossible to manipulate this extra ink twice the same way, every monoprint impression will be different.

To explain this further, take a look at the two portraits shown below. Elie Nadelman by Leonard Baskin is a monotype. The composition is created of solely ink manipulation on the plate- there are no etched or engraved lines delineating the profile. In contrast, the print Elizabethan by Irving Amen is a monoprint. Etched lines add contours to the face, eyes, and beard, while printing ink (applied not in the grooves of the etched plate lines but on the surface of the plate) adds color to areas like the cheeks, forehead, and background. If Irving Amen tried to create another impression of this print, he would not be able to mimic exactly the placement, intensity, or saturation of each color- which is what makes this print an monoprint and not a colored etching. There can only be one impression like this one. 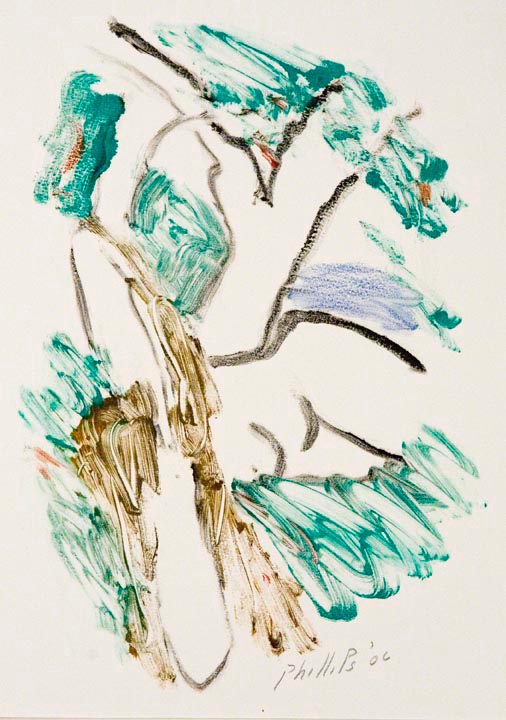 We are excited to announce our new summer show, Monotypes, which will open on July 17th with a nighttime reception at the gallery from 5-7pm. A monotype is the most painterly method of printmaking, created by manually adding ink onto a plate, which is then printed through a traditional press. While other printmaking mediums are composed by way of hard, precise lines and detailed crosshatching, the looseness and gestural freedom allowed in a monotype can be an invigorating breath of fresh air for artists. The prints chosen for the exhibit are glowing examples of this unbridled, and sometimes playful, independence from the technical, benefiting from the simple swipe of a brush stroke, the pooling and blending of inks, and the unique translucency and saturation of color. The show will remain on view through September 12, 2015. Selected Artists: Linda Adato, Leonard Baskin, Philip Bennet, Susan Goldman, Takamune Ishiguro, Alessandro Mastro-Valerio, Matt Phillips, Clare Romano, Peri Schwartz, Bruce Waldman, Steven Walker, and Janet Yake. We will share more with our OPG Blog readers and followers as the show takes form, so make sure to check back for updates!

We are very excited to announce to our OPG blog followers and readers our fall 2013 show, Alessandro Mastro-Valerio: A Retrospective. We will celebrate Mastro-Valerio’s captivating and varied printmaking career with an exhibition of more than 20 prominent works from the Gallery’s collection. On view from September 20 through November 9, 2013, the show includes Motif in Seascape, the 1949 Cannon Prize winner, as well as several of his original printing plates. We will celebrate the opening of Alessandro Mastro-Valerio: A Retrospective with a free nighttime reception on Friday, September 20, 2013, from 5-8pm at the gallery.

From his earliest drypoints to his later experimentation with mezzotints and aquatints, Alessandro Mastro-Valerio (1887-1953) studied and explored the female form in his 22 years of printmaking. Stumbling upon a display of mezzotint engravings at the Century of Progress Exposition in Chicago, 1933, Mastro-Valerio  was intrigued and enchanted by the printing method. Mastering the medium quickly, he published his first mezzotint in 1934, and one of his earliest mezzotints, Morning, was chosen for Fine Prints of the Year in 1935. Rich in tonality, Mastro-Valerio’s prints glow and breathe, and are filled with a quiet emotion— one that resonates deeply with viewers and his admirers.

His two brief departures from the female nude occurred in the years of 1931 to 1933, when he produced mostly landscapes, and in the last several years of his printmaking career, from 1950 to 1952, when his prints were pure abstractions, created from continuous or single-bite aquatints. Mastro-Valerio also experimented with scale, producing several small works of reclining nudes, each on plates no larger than two-inch squares. Enticing in both miniature form or on a larger scale, Mastro-Valerio’s prints have an undeniable magnetism and draw. 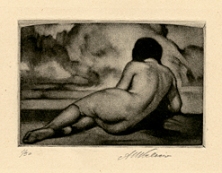 We are thrilled with the opportunity to introduce his amazing work to DC’s art community and OPG friends and followers. The retrospective will illustrate the extremely varied and dynamic range of Mastro-Valerio’s prints, and offer many styles ( and price ranges) for interested collectors.  While we are still in the planning stages for the show, our website has been updated with all of his prints. You can see them here.

Make sure to check back on the OPG blog for more details as the show comes together, including information regarding the opening night party and reception!

Below are the nine prints we have by 20th century artist Alessandro Mastro-Valerio (1887-1953). From his earliest drypoints to his later experimentation with aquatints, Mastro-Valerio studied and explored the female form in his 22 years of printmaking. His two brief departures  from the female nude occurred in the years of 1931 to 1933, when he produced mostly landscapes, and in the last several years of his printmaking career, from 1950 to 1952, when his prints were pure abstractions, created from  continuous or single-bite aquatints.

An experienced painter, Alessandro Mastro-Valerio was introduced to printmaking  by his dear friend, Dr. Warren Pl Lombard,  in 1930. His first prints were drypoints. He began experimenting with etching and soft ground in a series of views of the Garganico area in Italy and worked briefly in this period with aquatints. During a trip to Chicago to visit the Century of Progress Exposition in 1933, he saw and was enchanted by a display of mezzotint engravings. Deciding that the medium would yield the image he had been seeking, he quickly taught himself mezzotint engraving. His first mezzotints were published in 1934. One of his earliest mezzotints, Morning, was chosen for Fine Prints of the Year in 1935. In 1948, his print Motif in Seascape won the Cannon prize from the National Academy of Design.

Motif in a Seascape. Alessandro Mastro-Valerio. Aquatint, 1949. Won the Cannon Prize from the National Academy of Design.

To see or purchase any of the prints shown above, please visit our website or our Georgetown gallery.

Here are our picks for the abstract admirer, who is drawn to artwork which takes some liberties, altering color and form to free itself from objective context. Reshaping the natural world for expressive purposes, abstract art is created through the  suggestive strokes of the monotype brush and free line of the etching needle. The abstract admirer revels in the freedom of shifting interpretations, seeing and feeling new things every time they look at their print. See our gift suggestions, taken from our early 20th century and contemporary collection, for the abstract admirer.  Enjoy!

To Be Received Again. By Heather McMordie. Lithograph with collagraph, on Stonehenge paper, 2012. Titled and signed by artist in print. Edition 2/6. $350.00 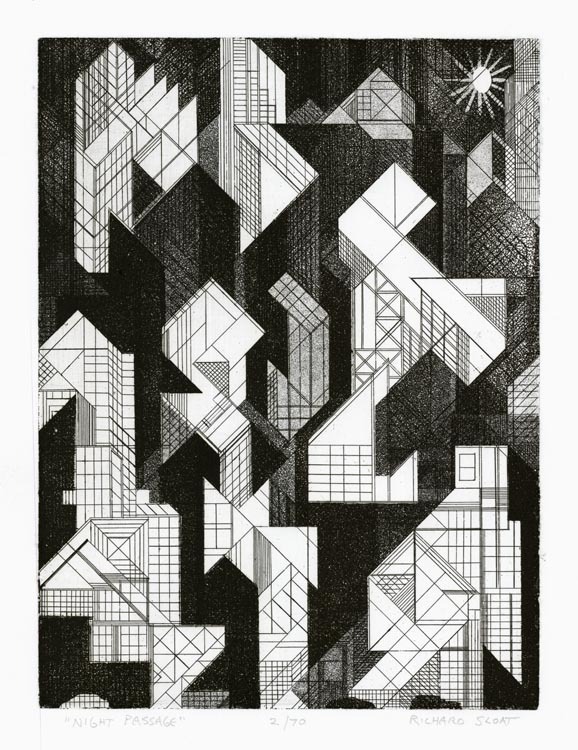 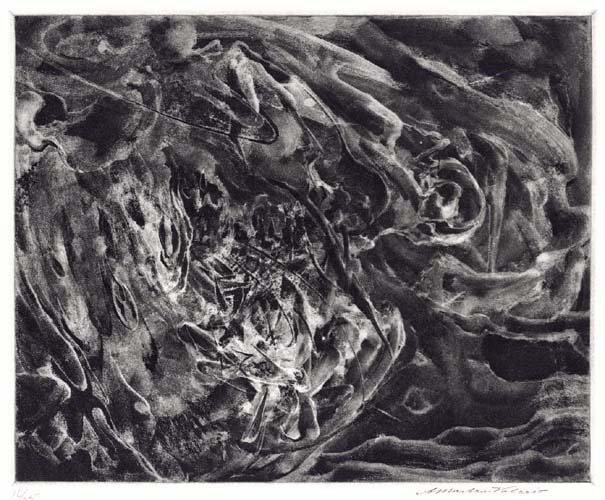 Check back soon for more great gift ideas- for everyone on your list. To view other 2012 gift guides, see below:

All sales can be made in store or over the phone. We also ship prints and maps, flat and insured, using FedEx 3 Day Shipping. Our gallery hours are Tuesday-Saturday, from 10am to 5:20pm. The number at the gallery is (202) 965-1818.