With Christmas quickly approaching, it seems only fitting to feature images of the holiday season. At the center of Christmas imagery is, of course, Santa Claus, and the man who popularized and cemented his image as a rounded, bearded jolly man- Thomas Nast.

Nast, a German immigrant who moved with his family to New York as a child, began his career as an illustrator for Frank Leslie’s Illustrated Newspaper. His career blossomed once he was hired by Harper’s Weekly in 1859, and he went on to be a war correspondent and journalistic crusader. A talented illustrator, his political depictions of republicans as elephants and democrats as donkeys are still in use today. At the peak of Nast’s career, he took on anyone he disagreed with- the Ku Klux Klan, dishonest politicians, and anarchists. His biting political cartoons were responsible for bringing down the notorious politician “Boss” William Marcy Tweed of Tammany Hall, whose crime ring financially depleted New York City after the Civil War.

Despite the political and serious leanings of Nast’s illustrations, he was also exceptionally talented at capturing the essence of goodwill towards men. His family and holiday scenes reflect a more personal side of Nast, and many included depictions of his own children, or are set in his home of Morristown, New Jersey. 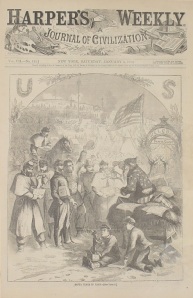 Thomas Nast first drew Santa Claus in Harper’s Weekly 1863 Christmas edition, with a cover and centerfold illustration. The Civil War was underway; the Union’s losses and the separation between soldiers and families were dampening the spirits of the Northern cities. The cover, “Santa Claus at Camp” depicted Santa Claus visiting soldiers in the camp with gifts and letters. From 1863 until 1886, Nast created a series of Christmas drawings for Harper’s Weekly. These drawings, executed over twenty years, exhibit a gradual evolution in Santa from the pudgy, diminutive, elf-like creature to the bearded, portly gift-giver of today.

Nast drew inspiration from his native German Saint Nicholas, a fourth century bishop, known for his kindness and generosity. He also pulled from other German folk traditions to add to the Santa Claus lore. The appearance of elves and a reindeer pulled sled are both products of Nast’s Germanic traditions. Nast solidified the image of Santa Clause for the American population. His illustrations created a rich and detail-driven story of Santa Clause- from the use of chimneys to deliver gifts, to the toy workshop in the North Pole. He invented the concept of the naughty-nice list, as well as the belief that Santa read letters from children. 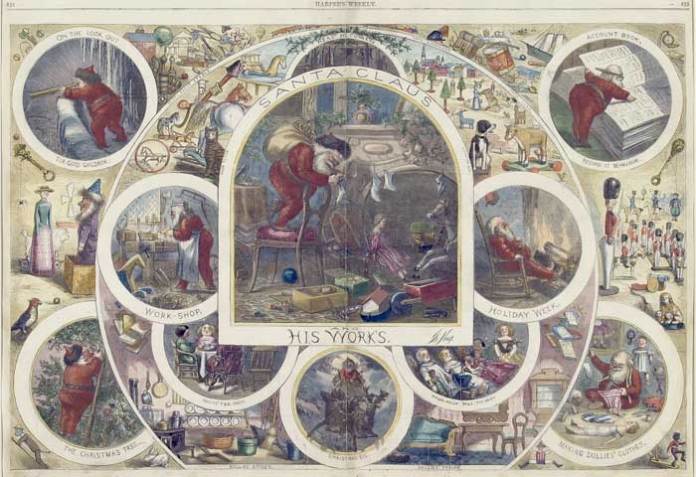 Santa Claus and His Works by Thomas Nast. Wood engraving, 1866.

In 1889, friends from Harper’s Weekly encouraged Nast to gather his popular Christmas illustrations and publish them in one book- Christmas Drawings for the Human Race. Boasting 126 illustrations, the book is a beautiful chronicle of Nast’s holiday renderings.